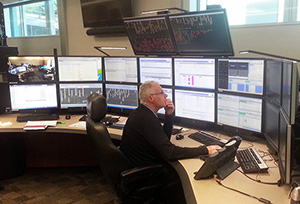 System reliability and performance were crucial in the recent upgrade of Transpower New Zealand’s control room.

Transpower New Zealand is the country’s national control center, operating the national grid power system 24 hours a day, seven days a week. The electric facility recently upgraded its 24/7 control room to simplify computer hardware, maintenance and replacement so that any PC upkeep does not disturb the regular workings of the center.

The goal was to isolate desktop computers in a separate location from the operators’ desks. Computer data—as well as keyboard, mouse and video signals—would have to be transmitted from longer, varying distances from multiple displays to the control center desks.

While cabling and multi-display support were important considerations, system reliability and performance were especially crucial as the control center is responsible for power throughout New Zealand and is under operation at all times.

The winning solution had to extend computer data long distances as well as minimize the amount of cabling and complexity of the system. A technology partner, WestconGroup, suggested Matrox Extio F2408 fiber-optic KVM extenders and expanders.

“Our main goal was to be able to house desktop PCs in a secure environment, physically separated from the end users and monitors,” says Andy Marsh, project manager at Transpower New Zealand. “This avoids the need to undertake system maintenance directly on or under operator desks, simplifying PC hardware replacement and other tasks.”

To that end, Matrox Extio units were placed on all operator desks, with up to 18 Dell UltraSharp displays. The Extio extenders were designed to fit in small, discreet places; they now function from behind each display, allowing operators to monitor over 7,300 miles (11,000 km) of transmission lines.

Since the new Matrox extenders were installed, “operators haven’t noticed a difference in graphics technology, which was also a major consideration—the technology should be invisible,” says Marsh.

By extending multiple signals over a single dual-LC fiber-optic cable, up to five USB 2.0 HIDs and four 2560×1600 displays can travel up to 3280 feet, or 1 km, from the host computer. A total of eight displays can be supported over one cable, and with a second cable and an additional extender and expander pair, a total of 16 displays can receive content from the same PC.

Today, operators at the Transpower New Zealand control center work across multi-monitor desks and receive uninterrupted content from PC computers in a separate, secure location. The upgraded room is quiet and organized, without the noise and excess heat of complex system equipment.

The Extio extenders are unobtrusive behind each Dell display, to the point of allowing rise and fall desk spaces for the Transpower center operators.

Computers in the other room can now be efficiently maintained by IT staff without disrupting operators’ work, and the total cost of ownership of the system has decreased since the installation.